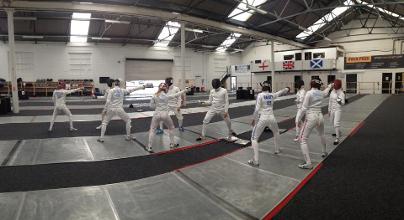 Feb 2020.  A visit to Newcastle Fencing Club last week gave me a very intense evening on the piste (that’s Newcy On Tyne).
I’d emailed the club coach, Iain Aberdeen, ahead of our trip to the Frozen North to see our daughter - recently relocated there. Iain made me welcome on the Thursday evening – Epee Night. The “Fencing Centre” is in an unusual location – a large industrial unit on a trading estate, but it's an ideal space for their 8 permanent metal pistes, with reels built into the floor.  It’s the main Epee training facility for British Fencing Team GB in the North and Scotland – so little wonder almost everyone there on the night was wearing ‘GB’ apparel. This is a big club – over 60 registered members and over 30 there on the night I attended.
Iain's format is half–an-hour of very hi-tempo drill, in full kit, followed by one big Poole match – where everyone fences everyone, regardless of age, gender, or level. Iain vigilantly patrols and is ready to give tactical advice and ensure fair play.
I think I did okay .... I won 9 of my 12 pool matches (each to 5 points). Then, a final hour of free fencing, and for me, not a second’s rest between invites ....all the senior fencers very eager to ‘grab the newbie’.
So overall, friendly, competitive... and a very intensive session.  I’ll certainly go again. Next time I’ll probably go for their Monday evening session, which is Foil and Sabre.  They also hold juniors and special coaching on Saturdays.
But 'oh', the following day...I ached all over ! That's the price to be paid for upholding the honour of Stone Fencing Club. The purpose of our trip was to give our daughter a hand with the decorating, but sadly, there was a lot more sitting than sanding.
Paul Smythe

Another competition success for one of our young fencers - Aldan Tai took third place at the British Youth Championship Qualifiers on Sun 26th Jan. The event was held at Packwood Haugh School, Shrewsbury. Aldan competed in Epee, in the U 16yr group - a field of 20 fencers. These are among the best youth fencers in the region. All those finishing in the top 8 have a guaranteed opportunity to represent the West Midlands region at the National Finals of the British Youth Championship (BYC) in May 2020. 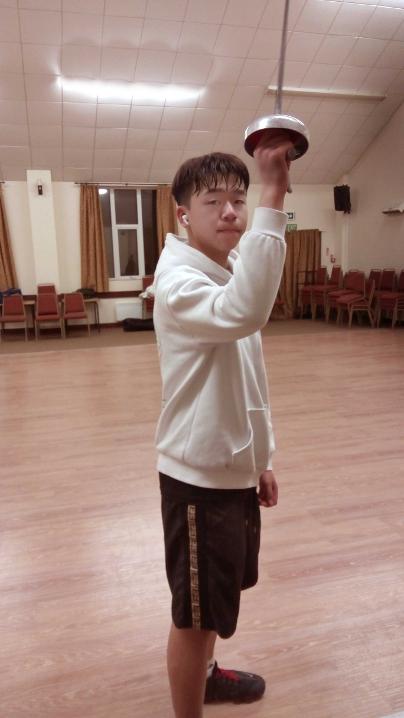 The Club’s Christmas Party was a great hoot again this year – held at the Duke of York PH in Barlaston. Our old friends Fred and Leslie kindly came back from their new retirement home in Wales to host the games and the competitions. Great also to see old friends Ivan and all the loyal partners of fencing club members. Normally, each Wednesday, club members step out into the evening air to “go fencing” but sometimes return with mysterious deep yellow and black body markings. Which must prompt partners to wonder at times, what their other half is really up to on a Wednesday evening. So the Christmas party is a good way to reassure partners that it’s all totally innocent – if you don’t count the mental bruises inflicted by the pub quiz.

In any pub quiz you would be forgiven for guessing that Vasco da Gama was the first sailor to circumnavigate the globe when in fact, as Fred revealed, it was Ferdinand Magellan. Doh ! But can you really be forgiven for not knowing the correct order of traffic lights ?  You’ve sat waiting for them to change a ‘million’ times but Fred’s questions are there to remind you haven’t learned anything new since you took your O-levels.

The bountiful supper of sausages, chips, onions and buttered bread was the best ever – especially good for healing the wounds of so many disappointed Quoits players earlier. Quoits must be the devil’s own way of reminding players that the laws of physics don’t work for you. The winning score was steadily building, initially from just over 100 to well over 300 - the eventual winner being lovely Leah – our pub landlady. Leah would have achieved superhero status just for the supper alone – but then she promptly donated the Quoits prize money back to the club !  Outstanding.

It was an easy choice to award Brian the clubman of the year trophy. His dedication to coaching both newcomers and experienced fencers is the beating heart of our club. Ken’s remarks amplified the breadth of contribution that Brian makes to our understanding of the modern laws of fencing – and given Ken’s coaching success this year that’s true praise.

We will miss Dan for the foreseeable future as he departs for a gap year, or more, in New Zealand. We hope that along with trying the extreme sports famously taken up there he will get a chance to fence at some of the big city clubs. Dan – if you’re reading this don’t forget to post back some pics for our website.

Thanks again to Fred for hosting another excellent bash – and hope you can continue fencing near your new home town. 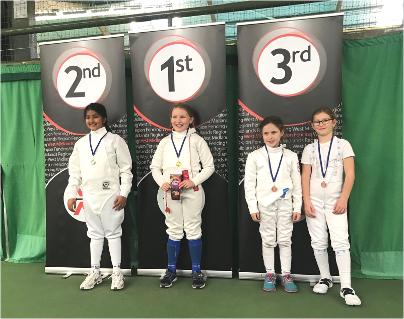 Our star young fencer Gianna won the silver medal place at a prestigious regional fencing competition – the CocksMoors Woods Epee Championships. Gianna travelled to the competition in South Birmingham with her Dad, early on Sat 9th Nov 2019. Gianna competed in the U9’s Epee competition and got through four tough rounds of pool matches to find herself in the final. Her dad said afterwards “this is her first Epee competition – what a result ! We’re all so pleased”.
The sweet taste of success. Well done Gianna. 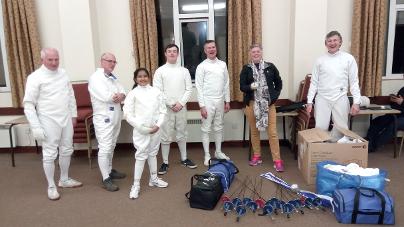 Mrs Denny Shortland (pictured) retired recently and will be known to many throughout Staffordshire as a champion of community and schools sports, as well as a fencing coach in local Schools and Universities. Denny is a fine Epeeist and contacted the club in early Nov to say she would kindly donate all her equipment – and will occasionally come and fence with us on a Wednesday evening to keep her hand in.

The equipment may be a few years old but is in pristine condition – all protective clothing washed, masks scrubbed and swords restored. So if you fancy trying fencing for the first time now is the ideal opportunity. There’s a good chance we can fit you out with the right size and ‘hand’ of kit – just turn up in grippy trainers, stretchy bottoms and a bottle of water.
Many thanks Denny.

We were delighted to welcome Robin Grey from BBC Radio Stoke to the Club last Wednesday evening. Robin took over the station's Extra Time programme one year ago and has made a great success by providing a lively weekly round-up of sports news - from international events to local sports stories. Each week he points the floodlights at a community sports group and towards local sports stars. 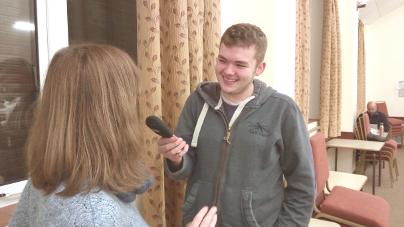 The broadcast went out on the following Frid night show - between 7 and 8pm, and again on Sat 26th at 7:45am. Its the first time that Fencing has featured on the show. Stone Fencing Club are the premier club in the Stoke and Staffordshire area so Robin's visit was a great oportunity to introduce our new club setting to the local radio audience.
If you want to catch the programme here's how you can hear it;
Tune to 94.6 FM and 104.1 FM and on DAB digital.
There’s a listen again feature for past programmes on the ‘BBC Sounds’ app (https://www.bbc.co.uk/sounds)
The Extra Time programme website is:
https://www.bbc.co.uk/programmes/p07nwcqg 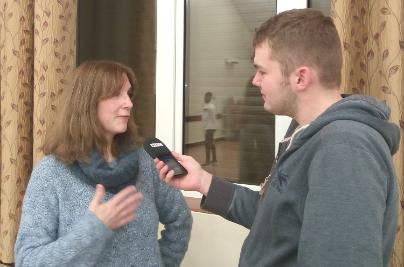 Congratulations to Ideh and Stuart

We have two new recipients of bronze fencing awards - Ideh and Stuart. Congratulations to both of them for all their hard work to achieve this award. 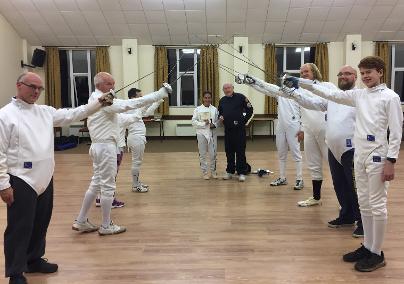 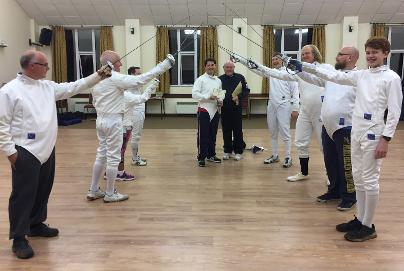 We are delighted that Gianna has received her bronze fencing award. Congratulations! 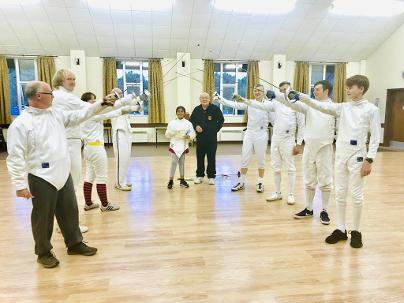 From Wednesday 7 November 2018, we will be meeting at Meir Heath and Rough Close Village Hall.

We are looking forward to fencing in our new venue and hope to see you there soon. Click on the Directions tab to find out how to get there.

Stone Fencing Club has been featured in a video made by one of our members as part of their A level course work. The creator of the video, Amelia, received a distinction, so the examiners must have liked it!

Each month, the 49ers Club gives Stone Fencing the opportunity to raise funds for new equipment, coaching, etc. By paying £3.00 per month and picking a number between 1 and 49, members have a chance to win £49.00 if their number matches the bonus ball drawn on the first Saturday of every month.
The winner of October's 49ers draw was Tracy Kennedy. Congratulations!
If you would like to join the 49ers Club, please contact Fred Powell.

Posted by Katey Goodwin on Thursday, December 8, 2011 Under: External Competitions

Congratulations to Hannah for taking part in the Foil competition at the Hereford & Worcester Open on Sunday 4 December 2011. Hannah came in 26th place out of 33 foilists.